Over the last month, identity on tyne members have been participating in a number of research and creative workshops with Dawn Felicia Knox, from the Book Apothecary project. 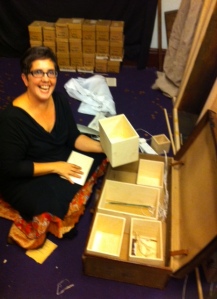 Book Apothecary is a travelling museum of artist’s books with North East roots.  Initially set up by visual artist Yvette Hawkins in 2011 to create partnerships between experienced visual artists and young people in order to produce innovative work exploring ideas of what the book could be.  Book Apothecary now operates as a collective of four artists.

The philosophy of open participation and community engagement is still very much at the core of the Book Apothecary philosophy as is the desire to build upon its diverse collection of book works. This collection is made up of handmade books, sound installations and curious objects, and merges both old and new technologies including printmaking, sculpture and digital media.

Presented inside a series of reclaimed and modified vintage suitcases and trunks, the collection continues to grow through residencies and workshops in settings accessible to the general public, such as libraries.

Dawn has been facilitating workshops where members have been able to explore their knowledge as well as personal, familial connections to the First World War. Issues that came out were not just around historical warfare and suffering. Contemporary wars were highlighted where entire villages, cultures and languages have disappeared through violence and death; repercussions of war that the media continues to highlight. 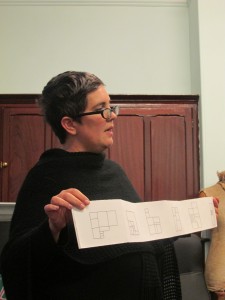 The aim of these workshops is to distil all the knowledge, connections and discussions from the group into one reclaimed suitcase. This is easier said than done, as the members of identity on tyne have connections with such diverse communities, cultures and heritages that it would be impossible to represent everything in one suitcase. It has to be accepted that this is the beginning of the archival process, something that will have to be repeated and extended, with further suitcases and responses developed and presented overtime.

Once this first suitcase is complete it is going to be used as a model to inspire other groups of adults and school children within further Book Apothecary workshops, to be rolled out over the next year with Dawn during this project.